Many dynasties rose and fell during the time period of 632 AD-1918. While Europe experienced Dark Ages, Reformations, Enlightenment, and a Renaissance, the Middle East enjoyed a time a prosperity and high intellect.
After the death of Mohammed, Islam was ruled by four men called the Rightly Guided Caliphs (Khulafaur rasyidun). It was after the murder of the last of these Caliphs that Islam started to move in various directions
After the prophet Mohammed, the next Caliph was Abu Bakar (Mohammed's Father-in-law) (573-634) The next was Umar ((Mohammed's Father-in-law) (634-644), Uthman (Mohammed's Son-in-law) (644-656), and the last Rightly Guided Caliph Ali (Mohammed's Son-in-law) (656-661)
The death of Ali split Islam into two directions, the son of Ali, Husayn guided Muslims under the premise that the leader of Islam must be a blood descendent of Ali, who was Mohammed's family. These people are seen today as Shiite Muslims. The other leader was Mu'awiyah, he was the first leader of the Umayyad Dynasty (661-750). These people are called Sunni because they believe any Muslim can lead the faith.
Within the first 100 years of the emergence of the religion of Islam, the word and beliefs of Islam spread rather quickly. Why did they expand from modern day Saudi Arabia and the Middle East? They had the desire the spread the word, and the need of agricultural products. Expansion was successful because the Muslims were of the same faith and also mostly the same customs so there was no barrier between groups of Muslims. The people that the Muslims conquered were the Persians and Byzantines. Neither of these cultures were really willing to go to war. Also, the people that were ruling these empires, were tired and the people were not enthusiastic about their control.
The Umayyad Dynasty (661-750)

The major advancements/accomplishments of the Umayyad Dynasty are the following:
1. The capital of Islam moves to Damascus, Syria
2. Expansion of Islam touched the regions of India, China, North Africa, and Spain
3. Arabic is the official language of the Empire
4. Arabian currency is used about the Empire
5. Roads are built
6. Postal routes are created.
Abbasid Dynasty (750-1258)

The Umayyad dynasty lasted under 100 year because other members of the Islamic world had different views on how to govern and follow Islam. The next ruling dynasty were the Abbasids (750-1258). They were essentially the anti-Umayyads. After 3 years of fighting, the Umayyads were defeated .
Under the Abbasids, the capital of Islam moved from Damascus to Baghdad, Iraq.
Ottoman Empire (1453-1918)

The Ottomans were named after the ruler Osman (1280-1324).
Osman and his group of people are found on the Anatolian Peninsula. In the beginning, the Ottomans worked as a buffer between the two major empires of the region, the Byzantines and the Muslims. Many people entered the Ottoman region because it accepted each side. All a person had to do is pay a tax and accept the superiority of Islamic rule in the region.

Government Structure and Social Classes
At the top part of the Islamic Social ladder was the Caliph and his household. The next level of social class was the professionals, traders, merchants, teachers, doctors. In Islamic society, trade and commerce was more valuable than agriculture. Most cultures value agriculture first, but in the Islamic Middle East, trade and prosperity was considered more important. The next level of social class was the Dhimmis, the protected people. These people were the Christians, Jews, and also the Zoroasterists. These people were permitted to live freely as long as they paid taxes and recognized Islamic Political Supremacy.
At the bottom of the class system were the slaves. Slaves in Islamic society were different than other slaves in history. Slaves could gain freedom in various ways, classical mistreatment was not tolerated, slavery was not locked into a specific race. However, in the end slavery is still slavery, and free is free.
The structure of Islamic government was essentially to following:
1. At the top was the Sultan or Caliph. The difference between the two is that the Sultan is a political leader and a Caliph is a religious leader. These two could be intertwined, but it was not mandatory. Eventually it became tradition, but it didn't start that way.
2. A vizier or grand vizier was be the next step of government. It was the job of the vizier to interact with the Sultan/Caliph. It was the vizier's job to enforce the decrees of the Sultan (the Sultan was always right). The vizier was to interact with other head's of government offices.
3. Under the vizier, were the Emirs. They were the governors of provinces. The Emirs had a lot of power. They were very rarely challenged. The Sultan would let the Emirs rule as long as the political machine kept rolling.
4. Local officials would control towns and villages and answer to the Emirs.
Islamic Trade Routes

Muslims and the Empires of the Middle East built an enormous and profitable trade network over land and sea. Trade routes were created to Europe through the Mediterranean Sea. Trade and interaction with Russia occurred over the Caspian Sea and Volga River. Islamic traders made it all the way to the shores of China by sailing the Arabian Sea, Indian Ocean, and Pacific Ocean. 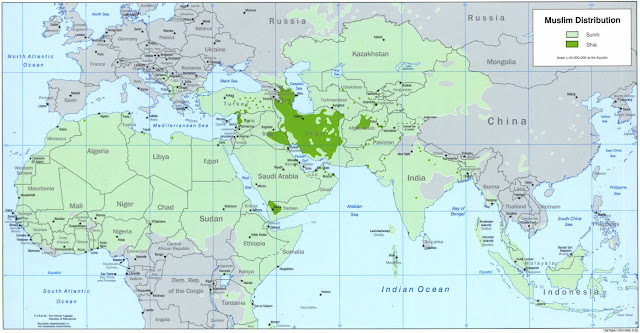 muslim distribution in the world: shi'ah was developed in iran and iraq,...  they are center of shi'ah....
in this region,.. there are many war has happened, caused by fanatically of shi'ah,...